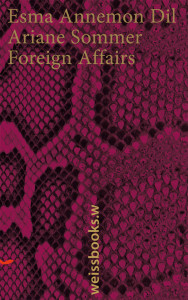 “Foreign Affairs” was released on the German speaking markets to great reviews and media acclaim. In thirty-four edgy short stories authors Ariane Sommer and Esma Dil dissect modern illusions of happiness and success as well as gender roles. The plot leads the female protagonists to some of the world’s most desirable locations and often times astray; Woman meets man in Shanghai, in a Russian nightclub, in the catacombs of Paris or an Arabian oasis. What lingers after each of these encounters is the foreboding that some of destiny’s gifts come at a high price.

“The female protagonist’s individual voices compose a choir telling us about the life of global urban young women and about these new lifestyles that play out as if orbiting the world … Desperately unhappy and cold at times, sexy and witty at others, Sommer and Dil report from the trenches between ecstasy and loneliness, yesterday and tomorrow, fake coolness and hidden sensibilities.” VOGUE

“These short stories are not just sexy; they hit a nerve. Offering an unbelievable number of strong opening lines, they drive towards the punchline. No doubt, Foreign Affairs is hot stuff. “ Sat1 TV literary critic Peter Hetzel

“These are some tough stories – wicked, sad, painful.” Abendzeitung

“Esma Annemon Dil and Ariane Sommer take a peek behind the facade of the world of privilege, revealing the lack of love and life among the rich and beautiful and those who want to be.”
3Sat Kulturzeit

“A modern book about women caught between lust and love for life, vulnerability and forlornness … on a quest for unusual encounters and extreme experiences, yet, more importantly, on a search for themselves.” Berliner Morgenpost

“Ultimately it is about exposing the lack of love in the globalized world of the rich and beautiful, the facade of which is presented in glamour magazines […] Foreign Affairs is a fictional glimpse behind the scenes, told from the point of view of young women who know very well how to play the roles they were assigned.”
Süddeutsche Zeitung

“This book is sexy. Not only because the cover feels like snakeskin. Thirty-four short stories explore the battle of the sexes. However: Women are not mere victims; they turn men into their tools and take what they want. At times, they are themselves defeated by the power they wield, but this adds a human touch to the narrative.” Schweizer Illustrierte

“Be it a sperm donation à la carte in Geneva or a marriage proposal with a call girl in Madrid – with a good deal of cynicism and wit, these stories air the dirty laundry of the international high society.” Cosmopolitan

“Foreign Affairs: Esma Annemon Dil and Ariane Sommer tell us about their journey through the world of glamour – casual, relaxed, and sun-drenched like Los Angeles.” Bild am Sonntag

“A book about the loneliness behind the glamorous facade … a wonderful short-story collection.” Bunte